We had a wonderful time at our 2016 Maker Immersion camp. A great blend of learning and creation, the participating campers actually had a chunk of time during which they worked on their projects.

Here are some of our thoughts on the camp.

First of all, the packing list. Here is our inventory for the maker camp. We had a good mix of electronics and craft materials as well as a couple of power tools and the volunteers in charge of materials had a tough time managing the enthusiasm with which the campers explored the materials and tools.

The participants this year were pretty lucky – they got to play around with the Intel Genuino kits – 15 sets of which were given to us by Intel Singapore for the programme. Volunteers from Intel also joined us for the camp, both to train the participants on the use of the Genuino kits and how to do basic programming and also as general facilitators.

Which brings us to facilitators. This year, we were truly blessed with volunteers and facilitators who made the camp possible – and some people (other than Intel Singapore) have to be mentioned really loudly.

Neo En Dian – Engineer and Maker, with an apprenticeship in one maker group under his belt, Neo was a great help to the students, especially with the electronics, engineering and tinkering. He was also a good mentor to the volunteers and facilitators.

Yit Chee Wong – Crafter and Science Educator – Yit Chee was wonderful at facilitating projects that combined craft and tech, and for giving some of the more tech inclined kids a little push towards crafting as part of their projects 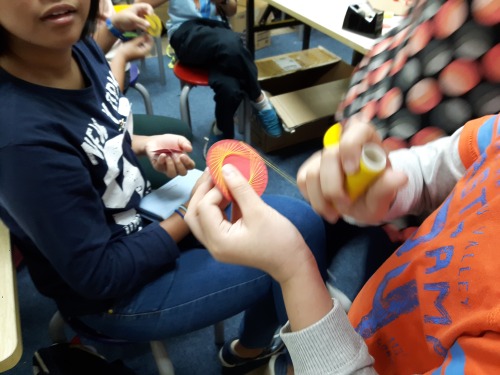 Wen Ying – Wen Ying was really everywhere during the camp. She was getting supplies, materials, registering kids, receiving lunch, and all the while juggling other projects and often working late into the evening.

Temasek Junior College and Raffles girls school – the Seven volunteers from these schools were awesome. Managing tools and materials, helping the campers where needed, resolving conflicts, troubleshooting circuits (sometimes spending all day drawing circuit diagrams). They had a lot of learning too. 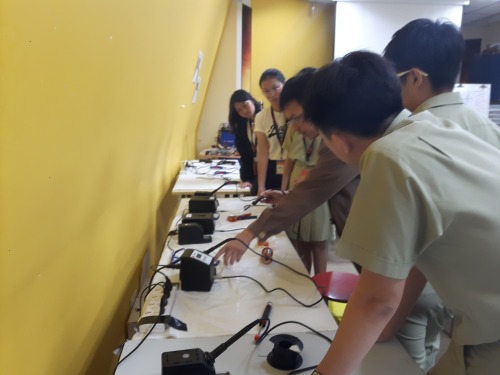 Suchita – Our adult volunteer, she was constantly there, helping, encouraging and cheering the campers.

We started off, as usual with the marshmallow challenge, based on the ted talk by Tom Wujec. We immediately saw leaders and innovators emerging in the teams and it was interesting, as a facilitator, that similar patterns of leadership and work came through during the rest of the camp. 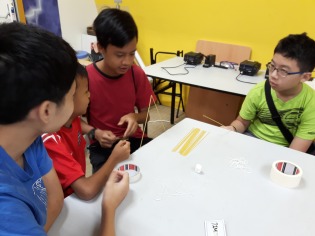 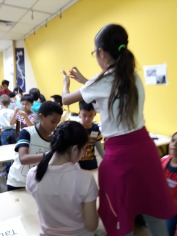 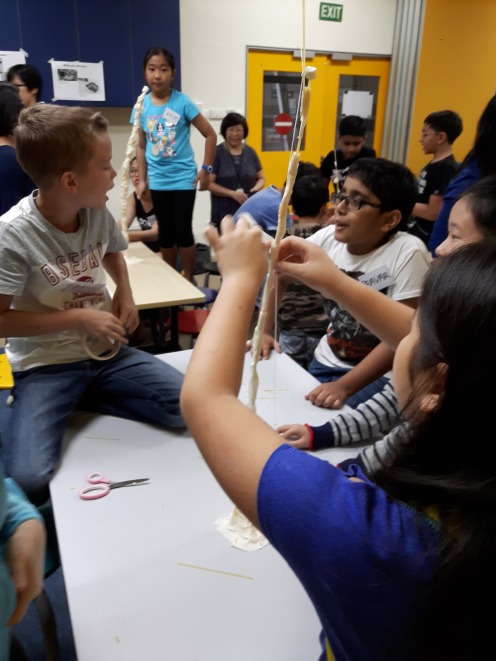 The quick prototyping began almost immediately, with many campers choosing a project and sticking to it. Others used the opportunity to play with materials and tools on some quick toys – things that came out of it included crossbows and boats.

Elda Webb from The Curious Design Network joined us on the first day afternoon to work with the students on tinkercad, which a number of them used for 3D printing parts of their projects.

So, after two days of semi formal instruction, where kids learnt circuits, sewing with electronics, soldering, motors, arduino, string art and other skills, they began prototyping in earnest. Here are some of the projects that came out of the camp 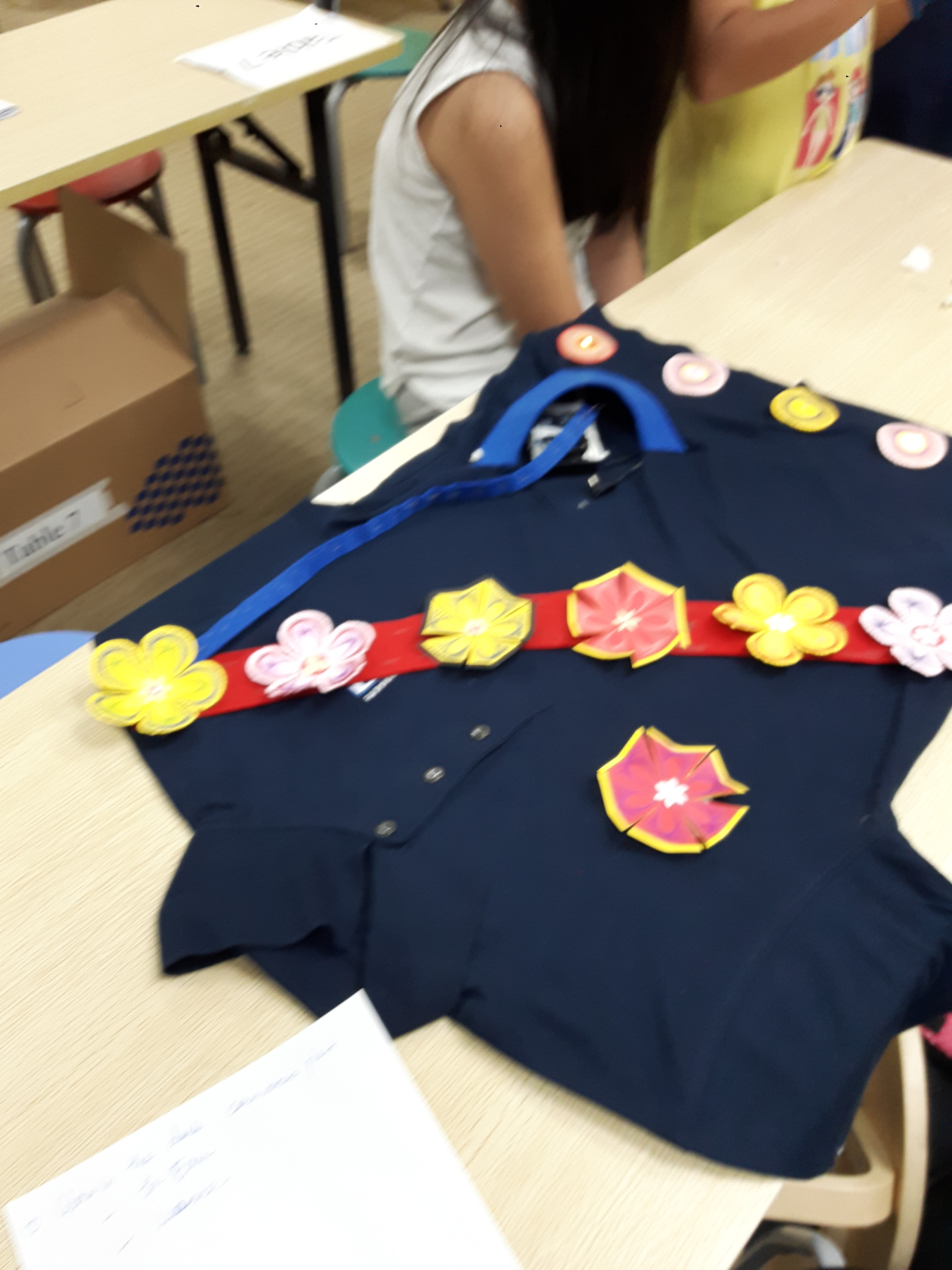 Ms LED universe – a combination of sewing, arduinos, string art, and even a little pocket for the components. Ms LED universe consisted of a hacked T-shirt with one of those sashes that Ms Universe wears. The sash was a detachable string art – LED flowers, which responded to a light sensor 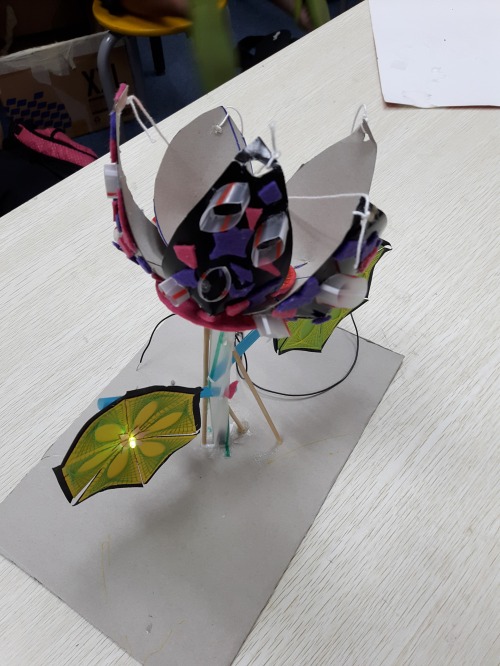 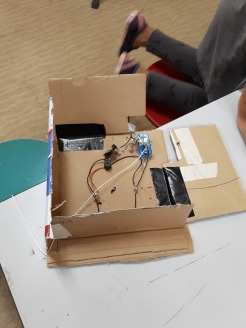 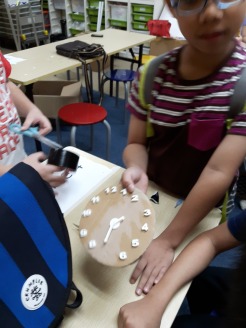 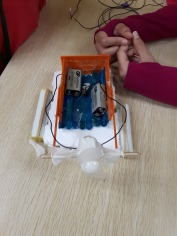 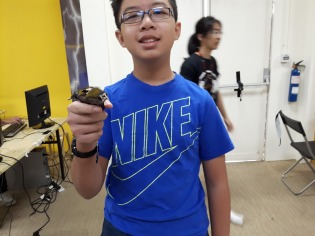 And here are some more projects – a DIY drill, a lot of boats, including a Roat, several burglar alarms, including one that was extremely noisy and disguised as a clock, a burglar alarm for a handbag, a badge holder and an interactive dress. Some of the projects worked, some didnt, and it was a great experience watching the children grind their teeth, go through team divorces and make up again.

Check out the video here

We have done a couple of different versions of the learning by Making workshop for teachers previously and this time, decided to focus on deconstruction and transformation of toys.

Radin Mas Primary approached us for this workshop as they were in the process of setting up a makerspace and wanted a better understanding of the kind of learning that happens in a makerspace.

Twenty seven teachers joined the workshop, many of whom came from non-Science backgrounds. – Science, Drama, Physical Education – but it was wonderful seeing the teachers leverage on each other’s expertise to complete the tasks assigned. At some point during the session, teachers were very impressed by a multi-talented fellow PE teacher who was a great artist and constructor!

We started session with a brief introduction to learning to make and how learning by making differs from traditional learning. We followed it up with the Yes And and the Yes But game developed by the D-school in Stanford.

We had two activities around the which the teachers explored the role of maker centered learning – Toy take apart and Toy transformed.

While some groups were hesitant to dismantle the toys, everyone eventually completed the task and took all the toys apart – right down to the last DC motor. The teachers then explored more about how their respective toys functioned and were fascinated to find that most of them comprised very simple mechanisms. They then shared their findings with each other and embarked on their next task – to utilise the old toy parts to reanimate a chicken!

The room was abuzz with excitement as the teachers exercised their creativity to come up with interesting ideas to complete the task. It was a pleasant sight to see the teachers purposefully using different materials and tools, such as hot glue guns and soldering irons, to animate their toy.

The session culminated in a sharing of all of the various toys created and it was indeed interesting to see the final products. 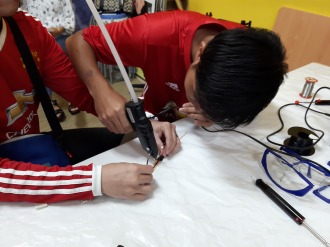 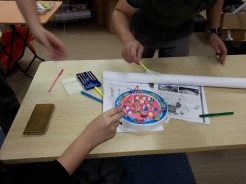 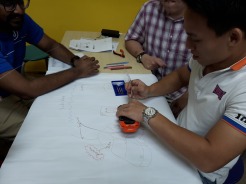 We hope that the teachers will be able to apply what they’ve learnt to create a safe and encouraging MakerSpace in school.

The half day workshop Learning by Making is offered with four different themes to choose from. A minimum of 20 teachers are required for the workshop. For more details, please contact Kiruthika (kiruthika_ramanathan@science.edu.sg)

About the writer: Nichelle is a student from Raffles Secondary school. At the point of writing this article, Nichelle was interning at the Science Centre for two weeks and facilitating various Maker programmes