We would like to thank everyone who have taken their time off to attend the Making in Art workshop at Science Centre. The importance of the workshop was to promote parent and child bonding while at the same time allowing participants to engage in multiple hands-on activities teaching them about Science, Art and Technology, and we were glad to notice that the children were enjoying themselves with the activities along with their family.

Here are some photos during the workshop.

More Photos can be viewed here.

Here is a video that you can see.

For those who have missed the workshop, here are some activities that were conducted during the workshop which you can try.

Paper Circuits: There are many creative ways in which you can play around with circuits. Here is one http://www.sciencebuddies.org/blog/2015/04/creative-circuits-with-copper-tape.php

Soldering: Soldering may seem daunting to a beginner, but young kids can handle a soldering iron. Try your hand at PCB design Easy, EDA.

String Art: String art may be tedious as the cuts required have to be symmetrically aligned, however, it is a good way to integrate art with Mathematics. It is also a great way to improve patience and fine motor skills.  Here is a video tutorial in which you can start from https://www.youtube.com/watch?v=U-diObeiBeQ

You can also check out Makezine and Instructables as it offers great ideas on projects that you can make at home.

We hope you can join us at our next workshop on the 9th of April going with the theme Making Toys and Games. This would be a great time to look at homemade and self made toys, everything from low tech “Kampung style” toys to robotic toys. You can register at https://www.regonline.sg/2016workshop2

The Pop-Up Makerspace was a 2-day weekend event held at Junyuan Secondary School, in conjunction with the yearly Bursary Awards Ceremony. The idea of organising a Pop-Up Makerspace during the ceremony was to introduce the Maker Mindset to students and families. Some may not have heard of ‘Making’ while others would be more interested to learn more about it, especially when there are hands-on experiences provided for them to work on projects at the various booths.

Students were encouraged to participate in the activities hosted by the various booths where they explored learning, Science, tech, and craft in innovative and experiential ways. Playeum was one of the hosts for the activities. Parents and kids work on the art of speed booth, creating their own wheeled-gadget. The activity was very open ended, encouraging creativity.

Playeum’s booth complemented the space by Imagin8ors, and many kids walked over to motorize their wheeled gadgets.

We had brought in the WaterColorBot, previously showcased at the Hour of Code. Students were very interested in the robot as they are able to paint the image that they want, knowing that is operated through the WaterColorBot that is being controlled by an Arduino and three motors. Many of the parents were wowed, especially when we shared that the WaterColorBot was the brainchild of a ten-year-old. We were glad that sharing the WaterColorBot made visitors to the space think deeper on how such products are being invented and thus broadens their imagination through the brainstorming of ideas.

And then there were goodies! Participants to the space got to bring home a Google Cardboard (VR Google Kit) that they could develop for. 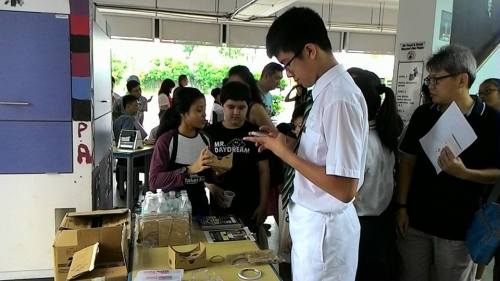