It was a fantastic experience organizing the camp, the enthusiasm of the children was great. The camp would not have been possible without the collaboration of local and Overseas Makers: Green Issues by Agy, The Bunglin Tinker, The Renaissance Engineering Club, Hackidemia, and The Curious Design Network. Here are some of the reflections from the camp as well as a compendium of resources for parents to follow up where necessary

The camp began with an introduction and icebreakers session, followed by Design Thinking for Makers by Elda Webb.  The children learnt about Empathy and the importance of communication for good design. Something different was that kids were required to design something for their partner, as opposed to themselves.

After lunch, the participants worked on their first project – Fabric Hacking – conducted by Susan Ong from The Bunglin Tinker 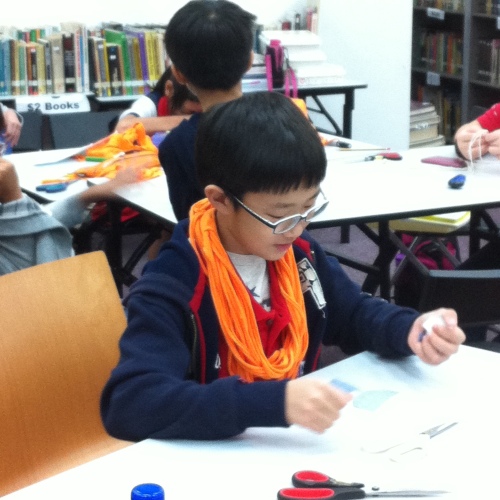 Susan also spoke to the children about the need for upcycling and the environmental impact of garbage.

STEAM advocate Liyana spoke to the kids on what it means to be a Maker. Liyana’s slides are here: Makercamp-talk

On the Second Day of camp, Makers from the Renaissance Engineering Programme took over to introduce the campers to Electronics and Coding.  Details on the activities conducted are here

Set up of materials

On the 12th, We welcomed Agatha Lee of Green Issues by Agy who taught the campers how to sew electronics to fabric

In the afternoon, there was woodworking, where the kids learnt to drill and make a plant press. Photos to come.

The camp ended with an inspiring talk by Stefania Druga from Hackidemia, who shared with the children the many projects done by children around the world.

We asked the kids after the camp what they would like to learn next. Here are some of the responses.

And those, I believe, gives us enough material for several more camps. Keep learning an Keep Making!